The chakra system is the basic energetic system of the body, stemming from ancient yogic science. It starts at the base of the spine and travels up to the crown of the head. These “wheels” are energetic spheres located on specific points up the body and create emotional, mental, and physical effects. When energy moves freely through the chakras it stimulates the mental, physical, and spiritual health of the entire organism.

We are all composed of eight chakras (seven physical and one around the body—the aura) that dictate our strengths and weaknesses in life. There is a relationship between behavior and your dominant chakra because energy acts like a magnet. We constantly attract vibrations to ourselves that are on the same wavelength as the chakras from which we are operating. Kundalini Yoga allows the kundalini energy to rise, balancing and coordinating all of the chakras.

Below is an explanation of the chakra system, beginning at the most human level—The Lower Triangle.

The Lower Triangle is the largest and densest chakra set that deals with our basic survival and physical needs.

The first chakra deals with our most basic human needs: food, water, shelter, survival and simply belonging on the planet. If one has had early childhood trauma, experienced poverty or abuse, or has felt unsafe to be on the planet, oftentimes issues in the root chakra will manifest. The key is to learn how to heal early-childhood trauma as well as learn how to ground, build an inner foundation, create a sustainable life and feel safe and trusting to be living here on earth.

Location: End of the spine between the anus and sexual organs.

To feel, to desire, to create.

The third chakra is like the sun: it shines who you are out into the world. Kundalini Yoga works a lot with the navel, as this brings in personal power and transformation within the self and out into the world. It is the driving force to act and to complete conceptualizations and visualizations that one has in life.

The Navel Center is a beginning. It's the first point through which we are fed, nurtured, and given the energy to live as a fetus in the womb of the mother. Once your physical connection with the mother is severed, the Navel Point continues the more subtle function of being an area to collect energy from the Cosmos.

The Third Chakra is considered the reserve pool of energy within the body. It is from this area that the kundalini energy is initiated. It is embodied by the digestive system, diaphragm, and elimination organs. When the energy flows properly, it creates a coordination among all the organs of the body, giving the energy and will to act. This is associated with the archetype of the spiritual warrior, one who is able to know one's mission and formulate the energy to act and complete it. Without a strong Third Chakra, you have many ideas and many good intentions, but they do not come to fruition.

Location: Area of the Navel Point

The heart chakra is the midpoint between our Lower Triangle (dense, human chakras) and the Upper Triangle, (our connection to spirit and source). Here, we experience "me to we."

The heart chakra is everything that has to do with service, forgiveness, and love, and is the fuel behind the heart-felt missions we have in the world. We must love something in order to commit to it fully and bring it to the world, whether that's a business, a partnership, or new creation in life.

The heart chakra is the space where we relate to other people. Residing in the chest cavity and down the arms and hands, it's how we give and receive in the world. Without this chakra, life wouldn't have much meaning in a spiritual sense. We must have a strong and balanced heart chakra to speak words and think thoughts from a place of unconditional love, compassion, and higher understanding.

Location: Middle of the chest on the breast bone at the level of the nipples. 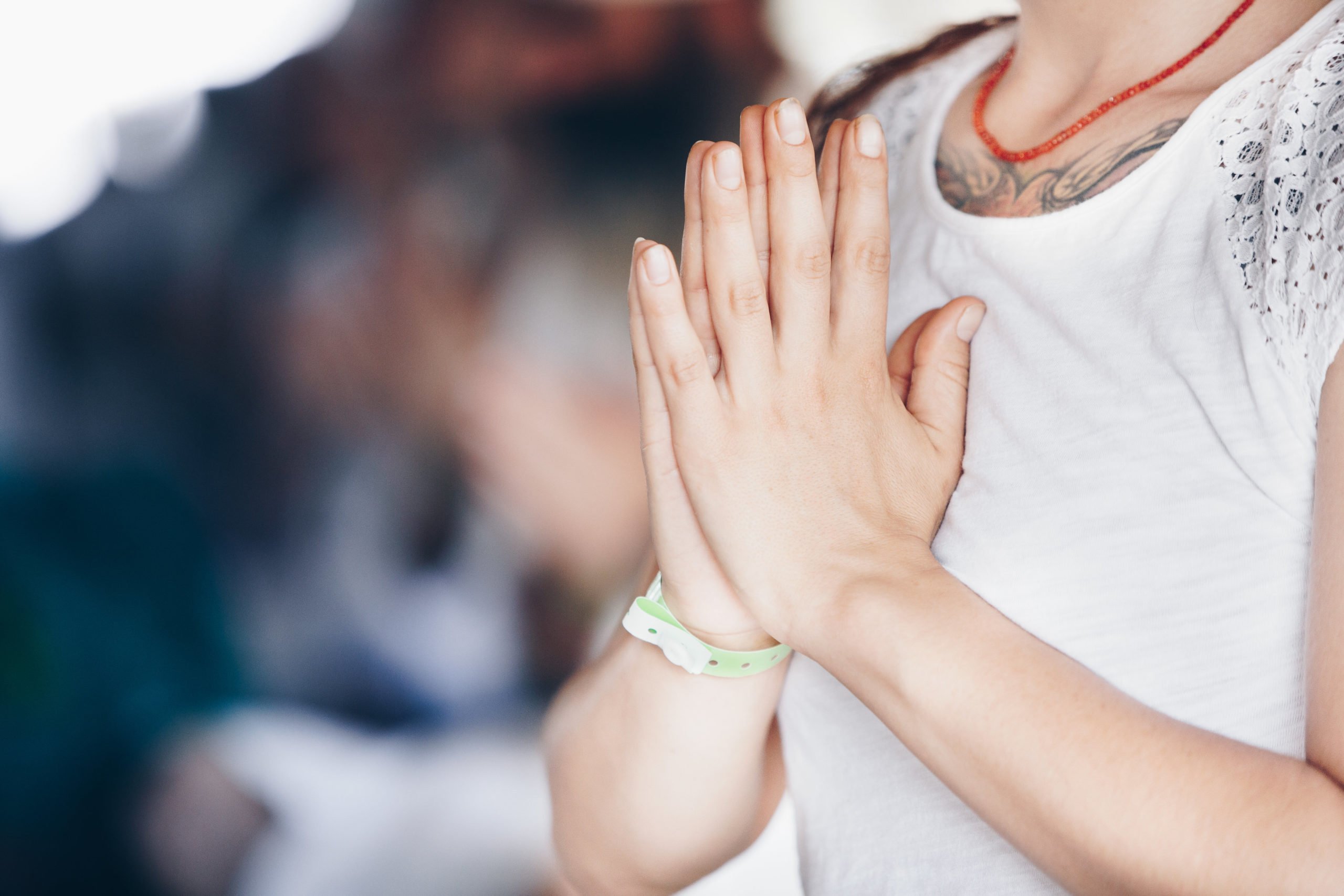 The Upper Triangle accumulates, creates, and refines energy, and connects us with our higher selves and the infinite source. There are no specific gross elements associated with the Sixth, Seventh, and Eighth chakras, as they correspond to the more subtle realms.

The fifth chakra is how we speak and communicate. Ruled by the element of ether, this chakra has a more subtle energy that is still very powerful, and can manifest from word to physical form in an instant. Associated with the throat center and thyroid and parathyroid glands, it represents the power of projection. It is a different kind of certainty than that which comes from the accumulation of personal power in the Third Chakra. The power of the 5th Chakra is having your tongue and the tongue of God be the same. Master the Word and master the skill to initiate actions that come from the soul.

Hearing and speaking the Truth. The Teacher.

The sixth chakra, also known as Ajna or the third eye, is the center of intuition. It represents the mind and intellect as well as the union of opposites. Qualities of the Third Eye are visualizing, fantasizing, concentration, determination, self-initiation, the power of projection, and understanding your purpose. Located at the brow point, it corresponds to the pituitary gland and is the "eye that goes beyond the two eyes."

The two physical eyes give you dimension in the normal world. The Third Eye gives you depth, dimension and scope in the subtle worlds. When it’s not balanced, the shadow side can cause confusion, depression, rejection of spirituality, and over-intellectualizing. It is from the Third Eye that you intuit the direction that you want to go. It is here that the major channels of energy—the ida, the pingala, and the shushmana—all come together. The three rivers of inner energy meet as one at the Third Eye.

This chakra allows mastery over the flow of the mind: going from being lost in thought and indecision, to trust, focus, and a crystal clear command of what you want to manifest in the world. To master the Sixth Chakra is to never be confused by any of the polarities of life and to be able to read between the lines.

Location: Between the eyebrows (the “Third Eye”)

The crown chakra is the union between our human bodies and divinity. A perfect merging, a total union between our individual consciousness and the universal consciousness, this chakra has been called self-realization, enlightenment, nirvana, samadhi, kaivalya, Kundalini awakening, communion, heaven, and so on. Here we can experience Wahe Guru—the ecstasy of knowing that we are divine, that we are all one, that we are boundless and infinite. The physical space is the crown of the head and is associated with the pineal gland, brain, and nervous system.

The Crown Chakra has the key characteristic of surrender—the humility that fills us when we bow, bringing the top of the head to the earth. The focus of attention, circulation and prana becomes focused at the Crown Chakra, giving a new sense of openness and strength.

Transcendence. The Tenth Gate. The seat of the soul.

Location: Crown of the head.

Yoga Exercises: Ego Eradicator, Sat Kriya, Concentrating on the Tip of the Nose, All meditation.

The Eighth Chakra is the aura. The aura combines the effects of all the other chakras.

When the circumvent field is strong, and the other chakras are aligned and functioning well, your presence alone seems to work and direct many of the forces in the Universe to effortlessly fulfill your desires and needs. 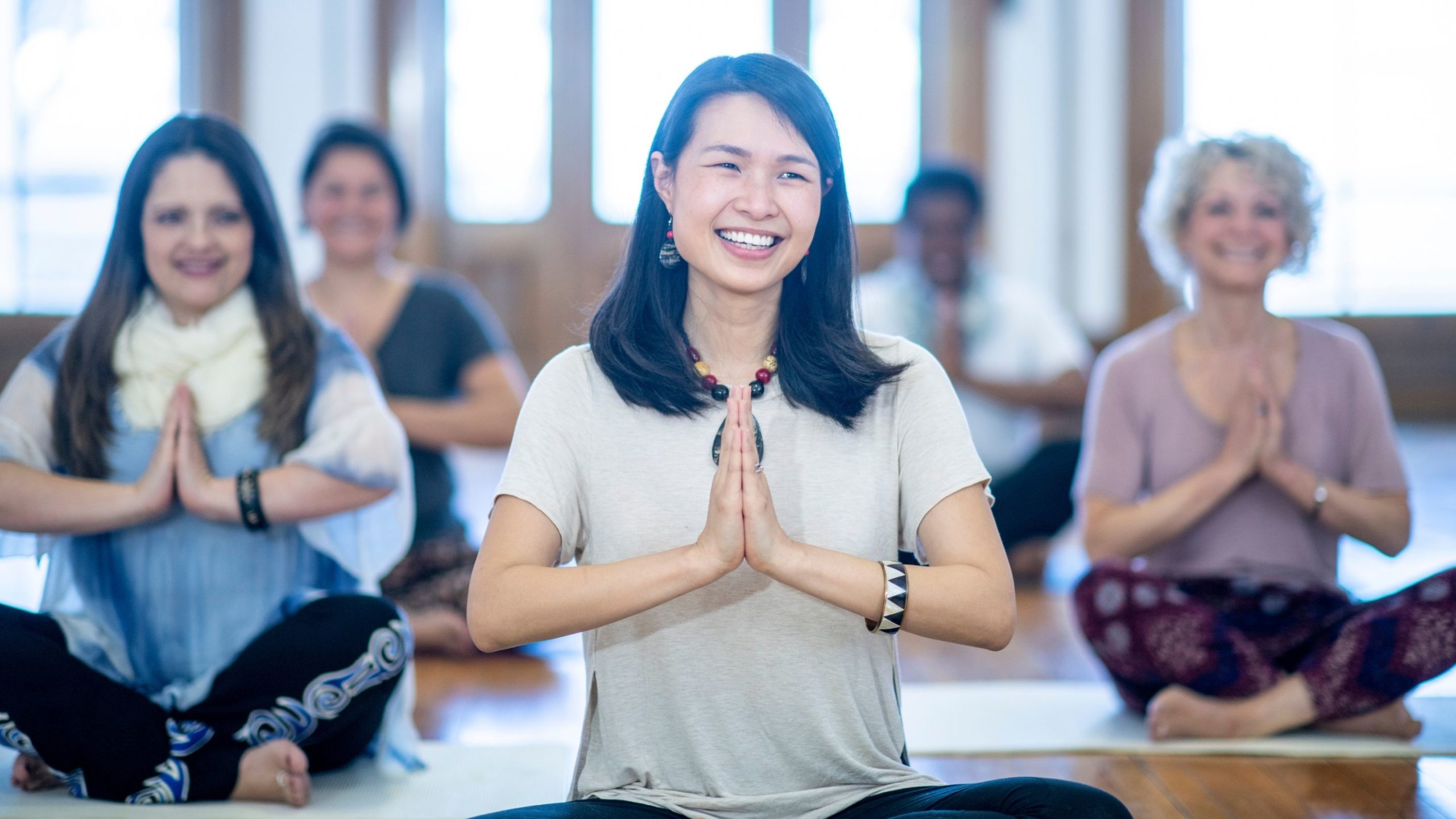 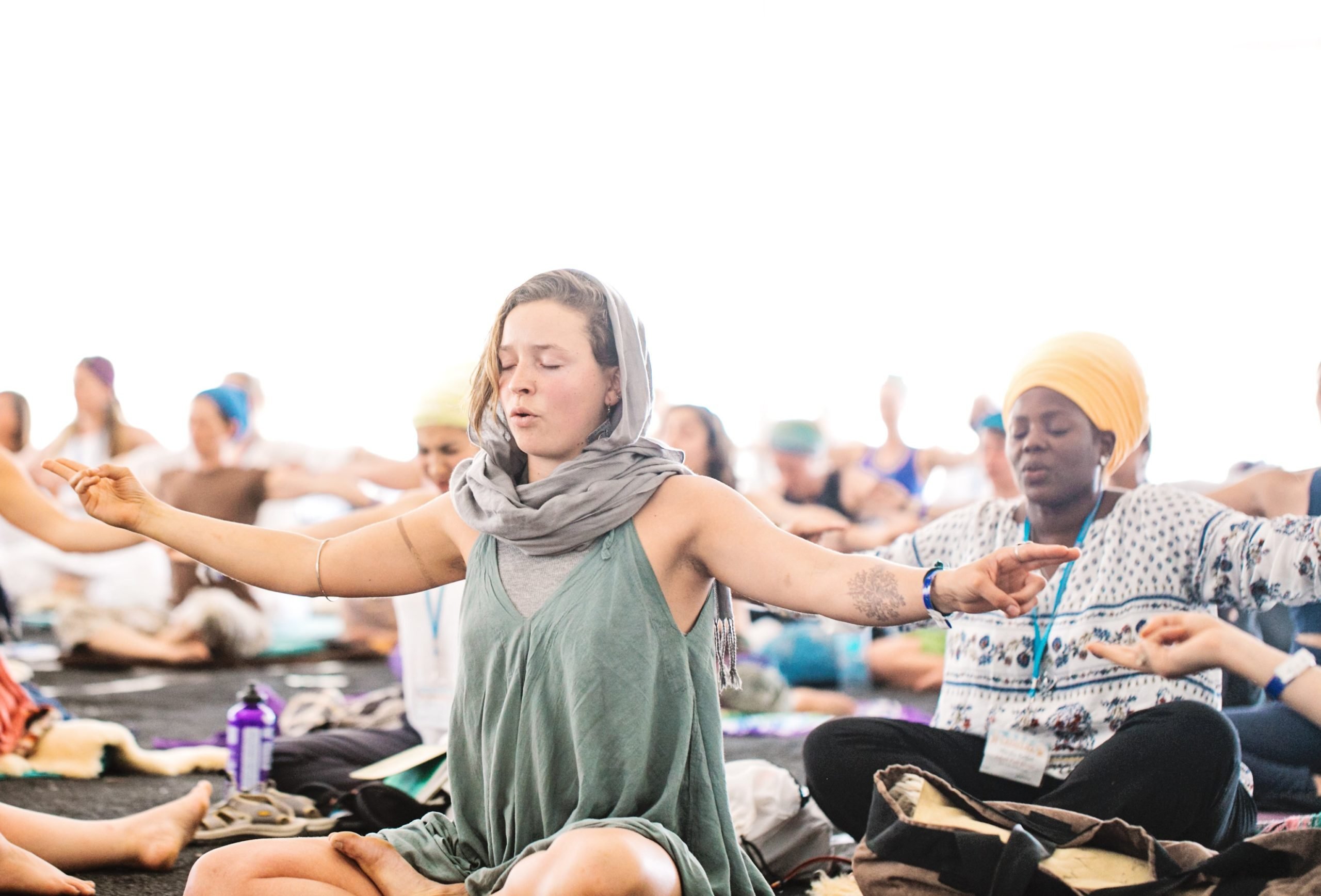 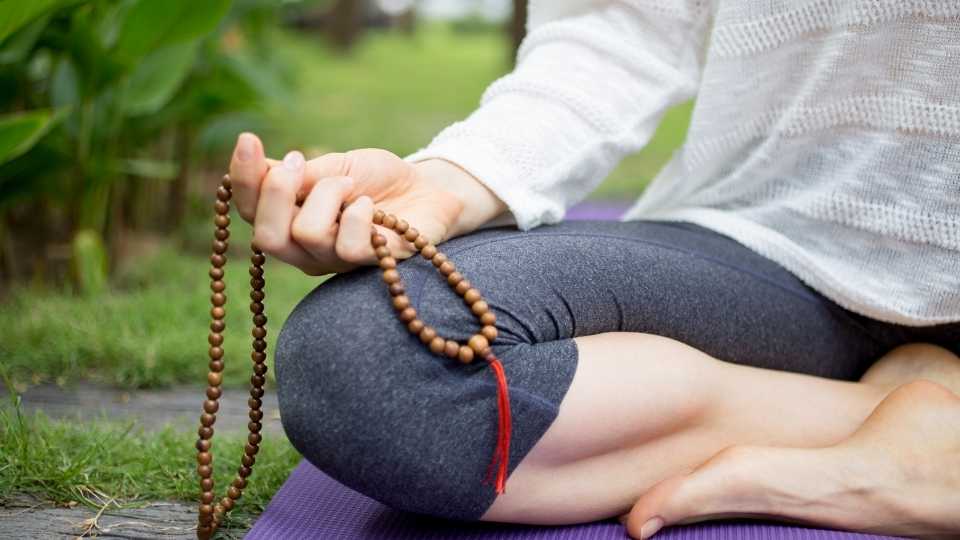 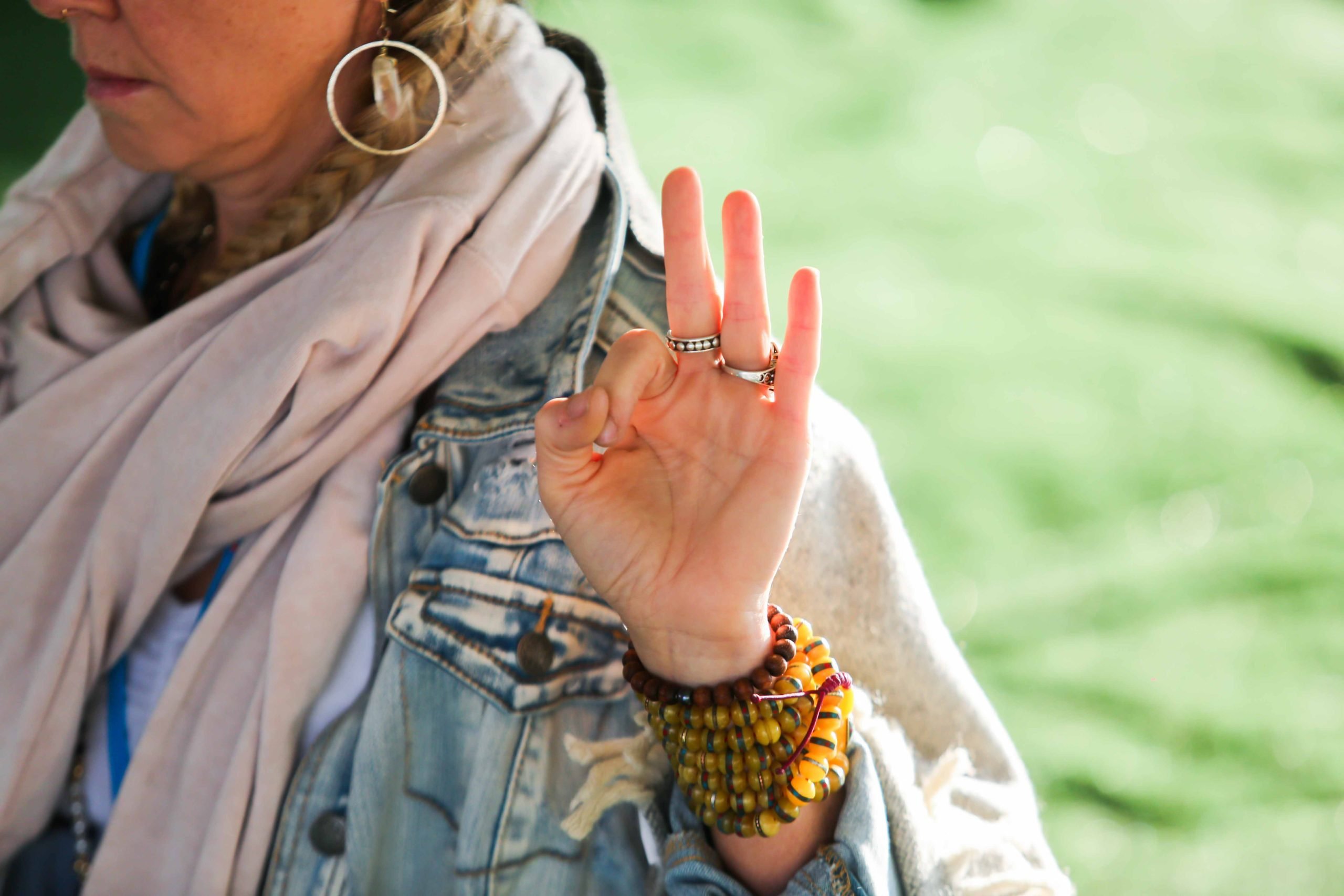