Vibrating with the Word as My Destiny Name

At Khalsa Women’s Training Camp (now called International Women’s Camp) in the 1980s, I met another woman named Shabad Kaur. On some mornings during the morning Gurdwara service, there would be a hukam read aloud (reading of the day from the Siri Guru Granth Sahib, Sikh scriptures) that included a reference to Shabad. Afterward, my name-mate and I would sit together and ponder the metaphors carefully to learn more about the nuances of our spiritual names and our related actions in the world. The hukam would speak in different ways about the power of the Shabad.

Here are a few excerpts of hukams for you to get an idea:

Through the Naam, peace is obtained; I am adorned and embellished by the True Word of the Shabad. (Third Mehl, Guru Amar Das, Siri Guru Granth Sahib, p. 34)

The desires of the mind are fulfilled when one is filled to overflowing with the Shabad. (Third Mehl, Guru Amar Das, Siri Guru Granth Sahib, p. 34)

It’s not a small name. I’ve had to grow into it over the years. Primarily, I am humbled by it; it feels like an honor to carry it. I tell people that it means, “Princess of the Word of God or the Divine Vibration.”

When studying the verses of Gurbani (text or words of the Guru), it becomes clear that the Shabad is also referred to as Guru, Satiguru, God, Akaal Purakh, Naam, Divine Light, Word, Naad (Divine Sound), Hukam, Bani, and so many terms we use to speak about our spiritual path.

As described in the excerpt above, the Shabad or Naam resides in the heart of all beings, and it also exists in the entire creation as a fragrance of the flowers, and as fire in the wood. We can recognize that the Unstruck Celestial Sound animates, vibrates, creates, guides, directs, and sustains every atom of our finite and infinite Universe and Cosmos.

Gurbani is beyond ordinary poetry or songs. In its essence, it is not just a few hundred years old, but it is as timeless as the Akaal Purakh (Timeless Consciousness) expressing the eternal human longing of the soul. It is Eternal, Immortal, and Divine.

An introvert by nature, I’ve learned over time to be very conscious with my words. In terms of the power to destroy, I do see the impact of a negative word. A few years ago, there was an incident when I criticized a member of our community in a reactive way, and it resulted in creating a rift between us for some time. We finally smoothed it over with, you guessed it, words! Our discussion was tentative at first, light chit-chat, before we got to work in re-building a bridge.

And on the opposite polarity, words can heal and become a balm to soothe, to reassure. I see that proven every day in my psychotherapy work. When I counsel a couple who is repairing a relationship that has contained a betrayal of one form or another, words of apology and personal ownership of the behavior can go a long way to re-establishing trust. The next vital steps, of course, are keeping their word to prove their trustworthiness.

I truly love words and I believe that they deserve respect. They can act to teach, uplift, inspire, even entertain and bring in the light of humor.

So, every time I recite Japji Sahib, or chant a mantra or say my spiritual name, I am activating energy, aligning with the divine vibration, and focused on what I can create. And what I destroy are my attachments of ego, my fear, my drama, and my self-doubt.

Learn more about mantra here or the power of receiving a spiritual name. 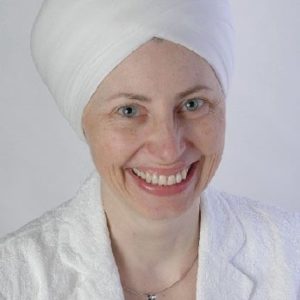 LCPC, LMFT, E-RYT 500, KRI Level 1 Lead Teacher Trainer. She is co-founder and director of Spirit Rising Yoga Center and Spirit Rising Foundation in Chicago, IL. She has taught Kundalini Yoga for 30 years, and as a psychotherapist, she integrates the teachings into treatment for adults and couples. The health and empowerment of women through the teachings of Kundalini Yoga is a cause that is near and dear to her heart and also specializes in Humanology, marriage, conscious birth, self-care, health, and wellness.

LCPC, LMFT, E-RYT 500, KRI Level 1 Lead Teacher Trainer. She is co-founder and director of Spirit Rising Yoga Center and Spirit Rising Foundation in Chicago, IL. She has taught Kundalini Yoga for 30 years, and as a psychotherapist, she integrates the teachings into treatment for adults and couples. The health and empowerment of women through the teachings of Kundalini Yoga is a cause that is near and dear to her heart and also specializes in Humanology, marriage, conscious birth, self-care, health, and wellness.
By continuing to use our website, you agree to the use of analytical cookies to collect website visitor statistics and give you the best user experience possible. We value you and vow to never sell or give out your personal information. You may visit "Cookie Settings" to provide a controlled consent.
Cookie SettingsAccept All
Read More
Manage consent