How I Conquered My Aversion to Chanting

My fascination with sound began through the study of music theory from a young age. In primary school I played brass instruments, violin, and later took up classical guitar. I was fascinated by the predictable organization and structure of melody and rhythm.

During high school this fascination led to an interest in electronic music. As I moved away from classical instruments toward the study of sound engineering through DJing and audio production, I was always amazed by music's powerful ability to impact and change me physically, emotionally, and mentally.

Modern studies show that the predictability of sound triggers the reward centers of our brains by stimulating neurotransmitter responses like serotonin and dopamine. Perhaps this is a reason why there is no known culture in the world that doesn’t have a unique style of music, and why listening to music is one of the most popular leisure activities that’s ubiquitous with people's everyday lives.

Archaeologists believe that rhythmic communication precedes language. Ancient Greek philosophers believed that music plays a role in affecting one’s ethical character and behavior. Throughout the Renaissance period music was believed to be a healing science, and was used in conjunction with medicine as therapy.

Historically, sound has shown to have an undeniable effect on the human psyche. Yogic philosophy views sound as the energy which forms the building blocks of the entire Cosmos. The metaphysical system and science of Naad Yoga has been used for thousands of years to systematically impact and transform problematic psychological and spiritual conditions by using rhythmic and structured patterns of sound vibration and resonance known as mantra.

When I was introduced to Kundalini Yoga, an aspect I felt uncomfortable with was the use of mantra. I was reluctant to join in with the class or use mantras in my personal practice. It wasn’t until I took on the challenge to practice 40 days of chanting the Adi Shakti mantra that I experienced the amazing power of this technology. More commonly referred to as the Morning Call, this meditation requires sitting in easy pose with gyan mudra while coordinating a sequence of breath cycles with drawn out chants of Ek Ong Kar Sat Nam Siri Wahe Guru.

This daily practice was profound and unraveled multifaceted layers of astounding sensory information and self-discovery. As the experience evolved, the sensitivity in my body heightened as I developed an awareness to the varying qualities of sound currents at their relative chakra points. It was amazing to encounter how the powerful sound currents not only impacted changes in my body, mind, and spirit through the vibrations, but also how they altered my state of consciousness.

Sound engages the whole brain and has a particular effect on the limbic system, a network of nerves associated with instinct and mood that control our basic emotions. I would always feel mentally clear and stable after practicing the chant. Overtime these changes became more permanent. I now believe that the use of mantra has the ability to play a part in overcoming many of our modern medical concerns, particularly with mental illness and anxiety disorders. It’s certainly been a useful tool for me and one that I continue to focus on in my personal practice and teaching. 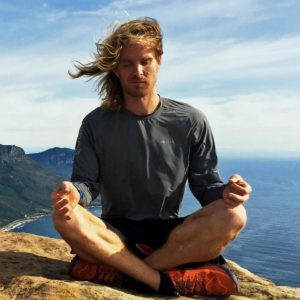 Kundalini Running founder Doug Wilson overcame a life-threatening brain tumor in 2013 and used yoga and meditation to support his rehabilitation. In just over twelve months, after suffering extensive cranial nerve damage, meningitis and leaving the hospital in a wheelchair, he became the first person to run 7 competitive marathons on the 7 continents in under 7 days. Doug now teaches these valuable techniques for maintaining health, wellbeing and coping with stress in the modern world. His scientific knowledge of yoga is backed up by practical, real world experiences that make his classes and workshops informative while opening the body, mind and spirit. www.kundalinirunning.com https://www.instagram.com/kundalini_running/ www.facebook.com/kundalinirunning/

Kundalini Running founder Doug Wilson overcame a life-threatening brain tumor in 2013 and used yoga and meditation to support his rehabilitation. In just over twelve months, after suffering extensive cranial nerve damage, meningitis and leaving the hospital in a wheelchair, he became the first person to run 7 competitive marathons on the 7 continents in under 7 days. Doug now teaches these valuable techniques for maintaining health, wellbeing and coping with stress in the modern world. His scientific knowledge of yoga is backed up by practical, real world experiences that make his classes and workshops informative while opening the body, mind and spirit. www.kundalinirunning.com https://www.instagram.com/kundalini_running/ www.facebook.com/kundalinirunning/
By continuing to use our website, you agree to the use of analytical cookies to collect website visitor statistics and give you the best user experience possible. We value you and vow to never sell or give out your personal information. You may visit "Cookie Settings" to provide a controlled consent.
Cookie SettingsAccept All
Read More
Manage consent